It seems only natural–but it was hardly a given–that the AWM’s children’s literature gallery would tell its story in pictures as well as words. Here’s how the gallery’s superb mural by Paul O. Zelinsky came to be.

Read more about the mural below

Original post from the American Writers Museum. You can find it through the link here.

The Who, Why and What of Those AWM Squirrels

So those 32 squirrels reading away inside the AWM’s Children’s Literature Gallery’s north wall mural are right at home, especially since each is reading a landmark American children’s book.

The mural’s towering oak with its spreading branches made the perfect choice for a “reading tree.”  It’s America’s national tree.  And squirrels, it turns out, made the perfect residents. Chicagoland has a huge squirrel population, including Wilmette, Illinois, Paul Zelinsky’s childhood hometown. “Squirrels also make good readers,” he shared.  “When a squirrel sits clutching an acorn between its paws, it assumes a posture that suggests huge concentration, energy, enthusiasm.  It curls around that nut from all directions.  Make it a book,” he added, “and that squirrel will become the most avid reader.”  Squirrels are curious, tenacious and open-minded when it comes to food selection.  The collaborators also noted that, like young readers, squirrels come in all sizes and colors.  Some even fly!  Addressing diversity was suddenly doable, especially when supported by those literate rodents’ book choices.The museum’s founder, Malcolm O’Hagan, earnestly believed the American Writers Museum must honor and thus include American children’s literature. The preeminent children’s literature historian, critic and author Leonard Marcus, who served on the museum’s Content Committee, happily obliged, successfully integrating children’s literature into the museum’s exhibits, present and future. It was his role overseeing the Gallery’s development and content that led to the museum’s only mural and permanent work of art, created by his colleague, friend and fellow Brooklynite, Caldecott Medalist Paul O. Zelinsky. “You can’t have children’s books without art,” Leonard Marcus advised. 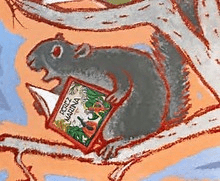 So just what books are these furry and colorful tree-climbing readers devouring?

The collaborators acknowledge the mind-boggling challenge of selecting 32 titles that not only represent “the best of American children’s literature of historic and recent times and the diversity of America’s people” but also include a variety of genres, authors and artists of a range of cultural backgrounds, fiction and nonfiction, books of popular appeal as well as books honored by the literary establishment.  The chosen titles needed to balance the older with the newer, and still appeal to today’s children.

Most titles are both familiar and beloved.  That squirrel who hangs from the lowest limb of the mural’s oak pores over Maurice Sendak’s Where the Wild Things Are.  The flying squirrel to his right is paging through The Real Mother Goose. Robert McCloskey’s Make Way for Ducklings.  L. Frank Baum’s The Wonderful Wizard of Oz.  Crockett Johnson’s Harold and the Purple Crayon. Margaret Wise Brown’s Goodnight Moon.  These are favorite books read to and/or read by children.

However, some titles surprise. For instance, Jane Watson Werner’s The Giant Golen Book of Dinosaurs and Other Prehistoric Reptiles published in 1960, which influenced a generation of paleontologists or Perez and Martina, published in 1932 and written by Pura Belpre, the first Puerto Rican librarian in the U.S.  Jerry Siegel’s first issue of Superman in 1938, a pop culture sensation, made readers of many and impacted future creators such as Jules Feiffer.  Gertrude Stein was one of the first writers from the literary world to venture into children’s literature in the early 20th century with The World is Round, published in 1939.
The oldest title on the list? Nathaniel Hawthorne’s A Wonder-Book for Girls and Boys, the first American book of imaginative fiction for young readers, published in 1851!

And not to worry. While Curious George is nowhere to be found, his creator H.A. Rey’s title The Stars is. Published in 1952, the nonfiction book still teaches children how to read the constellations.

Paul Zelinsky placed older books, such as Louisa May Alcott’s Little Women and Mark Twain’s The Adventures of Tom Sawyer, closer to the base of the tree.  E.B. White’s Charlotte’s Web, Virginia Hamilton’s M.C. Higgins, the Great and The Stars crown the tree.

Visitors should note that each squirrel is somehow affected by his reading choice, either holding a token suggested by the story or showing evidence of the book’s content.  The squirrel reading Esphyr Slobodkina’s Caps for Sale boasts a chapeau.  The squirrel reading Madeleine L’Engle’s A Wrinkle in Time is upside-down.

Visit the Museum to see which titles now feed and fortify the minds and imaginations of the mural’s 32 residents, thanks to Leonard Marcus’ and Paul Zelinsky’s efforts and the contributions of our country’s most learned librarians and scholars.

Curled up in the oak’s only hollow, placed at child-friendly eye-level, sits one engaged squirrel writing his very own book.

You can’t be a Writer without being a Reader first.