By leonardmarcus
Posted April 17, 2018
In Press
The Picture Book Biography Examined2018-04-172018-05-14/wp-content/uploads/2017/04/lm-logo-500.pngLeonard Marcushttps://leonardmarcus.com/wp-content/uploads/2018/05/53669-v1-350x.jpg200px200px
The recent NYU symposium: “Telling Lives: A Closer Look at Picture Book Biography” drew a lively and engaged audience of writers, illustrators, publishers, educators, librarians, and NYU students and staff. Publishers Weekly was there too, and here is their report on the morning’s events.
Read the article here on the Publishers Weekly website, or below:

Life Stories: A Celebration of the Picture Book Biography at NYU 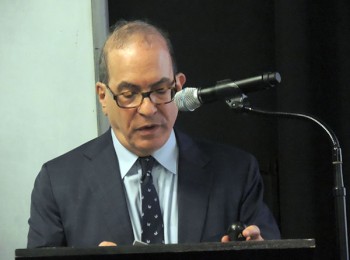 Authors, illustrators, and industry professionals gathered on Friday, April 13 for a symposium devoted to exploring a singular form of storytelling—the picture book biography. The program was presented at New York University’s Iris & B. Gerald Cantor Film Center in Manhattan. Children’s literature scholar and author Leonard S. Marcus first spoke to attendees, providing a history of the picture book biography. Marcus recently donated a collection of picture book biographies to the Constantine Georgiou Library and Resource Center for Children and Literature at NYU Steinhardt, to be accessed by faculty and students, including teachers in training.

Calling the biography “a form of storytelling that has always meant the most to me,” Marcus shared some of the earliest biographies, including The Life of Washington by Mason Locke Weems—the original source of the cherry tree myth—and Ingrid and Edgar Parin d’Aulaire’s 1939 volume, Abraham Lincoln. Marcus credits the picture book biographies of Jean Fritz, including And Then What Happened, Paul Revere?(1973) and Will You Sign Here, John Hancock? (1976), with their innovative approach to the format. Those books treated their subjects “as if they were still among the living.”

Marcus credits the Common Core state standards with providing “an unprecedented boost” to nonfiction titles, adding that the picture book biography has served as a forum through which to address imbalances in historical representation. He spoke about how today’s picture book biographies are uniquely poised to “make thoughtful effort to frame that which is problematic.” He noted missteps within the genre, referencing the publication of A Birthday Cake for George Washington, which he stated “deserved to be criticized.” However, he believes that “the damage was compounded by pulling the book,” which he feels led to “another erasure.” Calling the current wave of picture book biographies “a vibrant publishing phenomenon,” he added that “the stories we tell our children of other people’s lives are our stories too.”

The Making of ‘Action Jackson’

Next to present was the creative team behind the picture book biography of Jackson Pollock, Action Jackson (Roaring Brook/Porter, 2007), including co-authors Sandra Jordan and Jan Greenberg; book designer Jennifer Browne; illustrator Robert Andrew Parker; and editor Neal Porter. The speakers discussed the process of researching, writing, designing, and publishing Action Jackson, touching on subjects that included telling the stories of flawed individuals to children, distilling a figure’s life into a concise format, and representing the work of a singular artist, while also offering readers a novel piece of visual storytelling.

Jordan and Greenberg are longtime collaborators on picture book biographies, including Vincent Van Gogh: Portrait of an Artist (Delacorte, 2003) and Ballet for Martha: Making Appalachian Spring(Roaring Brook/Porter). “Sandra and I are fascinated by process, but we’re also storytellers,” said Greenberg. “We have to both like the artist and the story has to be fascinating and the work wonderful,” she said. Greenberg first became interested in Pollock when, as a child, she viewed Hans Namuth’s 1950 short film of Pollock painting (the panelists presented a clip from the film): “I was excited by his painting style,” she said. 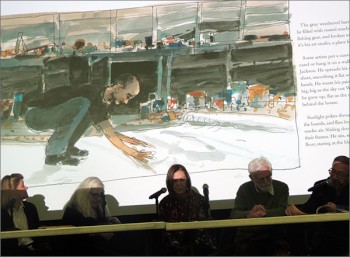 As Jordan and Greenberg began working on the book, they faced the decision of what aspect of Pollock’s life to convey. They visited New York’s Museum of Modern Art and had a “lively discussion” about Jackson’s painting Number 1A, 1948. The pair wondered what it was like for Pollock to create the massive, drip painting in his barn studio, and they determined that they would focus on Pollock’s painting of this single work and “invite young people into the conversation.” By focusing more on Pollock’s act of creation rather than offering a chronological biography of Pollock, the authors were able to artfully elude some of the thornier aspects of Pollock’s personal life: “Pollock did lead a turbulent life. This book would be more about the creative process,” Greenberg said.

Porter praised how the book represents Pollock’s process on multiple levels, commenting how “the rhythm of the language is reminiscent of the jazz that Pollock listened to as he worked.”

The illustrations for Action Jackson would also need to convey the dynamic nature of Pollock’s work—not in the sense of replicating Pollock’s art style, but in capturing the balletic movement of the artist as he created. “We wanted an artist who had a very fluid line,” said Porter.

Saying that “I’ve loved Bob Parker’s work since I first saw it,” Browne was particularly taken with his use of “gestural lines” and how in his illustrations, he often leaves pencil marks—an element that is in keeping with the theme of artistic process. Parker also had the opportunity to briefly meet Pollock in Sag Harbor in the 1950s.

In addition to the scenes of Pollock painting, the book features moments from Pollock’s personal life. In one image, Pollock prepares spaghetti with bright red sauce (he was known to cook a mean spaghetti sauce). Parker also created an image of Pollock at a party, a drink in one hand and a cigarette in another. “We know it’s not apple juice in that glass,” Porter commented. Verisimilitude aside, Porter determined that the cigarette would probably have to go, so they removed that detail for the final book.

Fairly late in their research process, Jordan and Greenberg were thrown a curveball. They discovered through their research that Pollock actually did not paint Number 1A 1948 in the barn at all; it had been raining, and he had painted it in his living room. As a result of this discovery, Jordan and Greenberg switched the focus of the story to Pollock’s Lavender Mist, a work that he had definitely created in the barn.

The authors crafted extensive backmatter, using this space to discuss the finer details of Pollock’s life, including his alcoholism. The footnotes were also an opportunity for them to indicate to readers what their own research process had been like. In fact, the citations have garnered attention in academic circles. Jordan’s sister-in-law once informed her that, as she was taking a course on footnoting, Action Jackson was one of the example texts: “I was so pleased,” said Jordan.

The panelists concluded with Porter calling this “an exciting period for picture book biographies,” for which Action Jackson was an early portent. 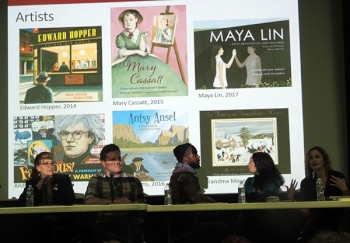 Next up, panelists discussed the broad expansion of the genre, addressing topics relating to how biography subjects are selected, how the stories are approached, and the value of picture book biographies in schools, libraries, and beyond. The speakers were Luann Toth, managing editor of reviews, School Library Journal; illustrator John Parra; author-illustrators Selina Alko and Sean Qualls; and Christy Ottaviano, publisher, Christy Ottaviano Books. Fabienne Doucet, associate professor of early childhood and urban education at NYU, moderated the discussion.

Doucet asked the panelists to share both the power inherent in and difficulties of presenting the lives of flawed individuals or those with controversial life stories, adding “we are all problematic.”

For Toth, she believes that our era is ripe for telling stories that offer “nuanced looks at lives.” Stigmas relating to issues such as mental health exist “because we don’t discuss them,” she said. She believes that picture book biographies offer a rare opportunity to safely explore such challenging subjects. Ottaviano welcomes authors who don’t shy from addressing the personal struggles of their subjects. In the book Antsy Ansel: Ansel Adams, a Life in Nature, author Cindy Jensen-Elliott pointedly addresses Adams’s difficulties with socialization and learning: “Today, Adams probably would have been diagnosed with autism,” Ottaviano explained. In fact, it was these very challenges that led Adams to spend more time in nature and begin taking photographs.

Husband-and-wife collaborators Qualls and Alko discussed their picture book biography about Mildred and Richard Perry Loving, A Case for Loving (Scholastic/Levine), noting their decision to include the moment when the Lovings were taken to jail. Alko called the scene representative of “a true part of history. That scene drove them to fight for what was right.” She also spoke about how remarkable it has been to see readers in classrooms respond to and grasp the significance of the Lovings’ story: “These books provide an entry way into really important talks,” she said.

The discussion turned to the topic of how movements like We Need Diverse Books and Own Voices have led to an expansion of the picture book biography category, and potentially a different paradigm for teaching history.

As a child, Quall’s own relationship with studying history was strained. As he began to understand historical figures on his own terms, “I realized that the way history was being taught was not very interesting… it was like telling the same story but with different faces.” To not share individual struggles, darkness, and nuance in the teaching of history, he believes is “to deny the gift of the past.” In Jonah Winter’s Dizzy, Qualls illustrates images of Dizzy Gillespie as an angry and abused child who finds his way through music. Dizzy’s difficulties make his triumphs more powerful, which Qualls believes is something that readers can learn from: “Everyone has the opportunity to take a stand for what’s important to them,” he said. 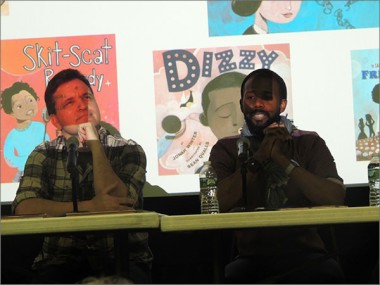 Parra is aware of “an openness to hearing other people’s stories” among readers today. He described the tremendous responsibility that artists and writers have to honestly tell these stories to younger generations.

The panelists discussed finding subject matter for picture book biographies and the different ways life stories can be presented. Ottaviano gravitates toward narratives that focus on the childhoods of artists or other figures, particularly if those figures were outcasts or misfits. Such stories resonate with “kids who are out of the box.” She feels that biographies that focus on the lives of individuals before they became famed figures can offer surprising new insights. She had often heard Jane Austen’s childhood dismissed as being “insignificant,” but in Brave Jane Austen: Reader, Writer, Author, Rebel, author Lisa Pliscou suggests that her childhood was anything but, detailing how Austen almost died from a severe illness. In Fab Four Friends: The Boys Who Became the Beatles, Susanna Reich similarly focuses on the early lives of her subjects, rather than their later accomplishments: “Everybody knows that later story,” Ottaviano said.

As in the realm of adult biographies, there is often more than one approach to telling a life story. Parra illustrated Monica Brown’s Waiting for the Biblio Burro (Tricycle, 2011), which is based on librarian Luis Soriano, who brings books to the children of rural Colombia. Parra was surprised to learn of another picture book biography about Soriano, Biblioburro: A True Story from Columbia(S&S/Beach Lane, 2010) by Jeanette Winter. However, the books take different approaches to Soriano’s life, with Winter’s book being more directly nonfictional. Brown’s book, meanwhile, introduces a fictionalized child who is overjoyed to borrow books from the traveling librarian.

Parra underscored how, even within the life of one person, there are different stories to be told. In the case of Frida Kahlo, the subject of Monica Brown’s Frida Kahlo and Her Animalitos, which Parra illustrated, he feels that the topic of Kahlo’s physical disabilities could be explored even further.

For Ottaviano, she sees great abundance within the picture book biography realm, with familiar figures being approached with fresh eyes and unknown figures being culled from history: “We are embracing it all around. It’s been very exciting,” she said.